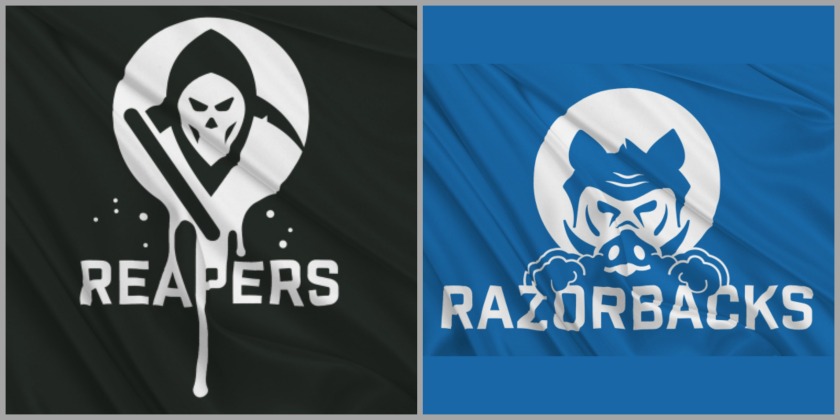 Sometimes, to open a season, the two teams playing in the first game are almost expected to set standards at a certain level, one which teams will beat as they settle into their grooves throughout the season.

Scoring on their first drive of the game, with a deep shot to the back of the endzone, the Reapers showed that perhaps the anticipated rust from the off-season may have been much easier to shake loose than first expected.

When turning the ball over on the Razorback’s first series and converting the return to a further six points, the Reapers were staking a very early claim to being this year’s team to beat. The Razorbacks were able to salvage some early pride though, intercepting the extra point attempt and returning the pick all the way down field, making the score 12-1 off two drives.

The Reaper defence shut down the Razorback offense, creating 3 interception opportunities in the first half. Whilst there we also some clear drops by the Razorback receivers, they were in the right place for their quarterback and greater execution could have meant a very different score line at the half.

The first half would be completed with a second passing touchdown and a second pick-six, resulting in a half-time score of 24-1. At the half it looked like the game was done.

Perhaps that could be the reason for what really was a tale of two halves. The Reapers may have taken their foot off the pedal, or perhaps the Razorbacks showed more fight than you might have expected from a team with only 1 point in a half of football.

On their first drive of the second half, the Razorbacks scored on a catch and run from their Centre, a player not normally considered a threat for such plays. That made the game 24 – 7 following the extra point attempt.

The Reapers, who seemed to have few problems moving the ball in the first half, found themselves turned over. Though it did not matter for long, as they forced another interception, their fourth and final pick of the game.

Another turnover of downs by the Razorbacks defence and their offense was able to drive down the field for another score and a successful 2 point conversion. This brought the game to 24-15.

The end of the game came down to whether the Razorbacks could stop the Reapers to get the ball back in time to score and then force another turnover to try to win the game. Able to turn the ball over on downs, but at the cost of all their time outs, the Razorbacks were forced to play hurry up offense in the final minute of the game.

While the game could not be won, the game remained competitive to the last second, with a pass into the endzone just out of reach of the open receiver. The Razorbacks were unable to get another play off and the game ended at 24-15.

It very much was a game of two halves, with the Reapers controlling the first, while the Razorbacks could be said to have won the second. Ultimately though, it was the Reapers who came out on top with the win, but both teams showed that they will be competitive as the season goes on.