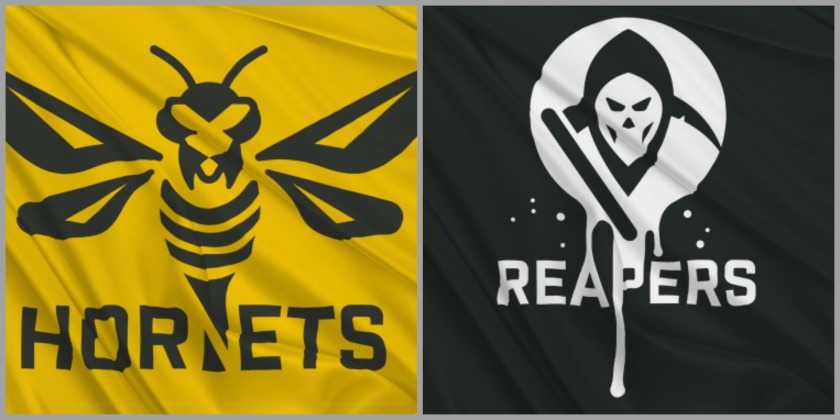 Week 9 would see current league leaders Reapers take on the offensive force of the Hornets, who had scored a massive 232 points so far this season with a solid passing game. Jordan Gallienne (“Jordy”) came into the game with 22 touchdowns (“TD”) and just 2 interceptions (“INT”). The Reapers on the other hand continue to make their mark on defence, allowing only 108 points prior to this game, boasting 14 INT’s, 6 of which went for TD’s. This game was not to disappoint.

The Hornets would start on offence and quickly drive down the field. On the first play of the game Jordy would find Sam Barrell (“Baz”), on a 10 yard out route, who turned the play into a 35 yard gain. Jordy would then find Mike Donaldson wide open in the end zone for a short TD as the Reapers failed to pick up the running back. After the failed points after touchdown (“PAT”) the score would be 6-0 Hornets.

The Reapers would go straight to their workhorse, Craig Batiste, on first down who picked up a quick 20 yards on the pitch. Following an efficient drive down the field, Simon King found Matthew Jackson in the front of the end zone on a scramble play. The Reapers would also fail on the PAT leaving the score 6-6.

The offensive force of the Hornets would hit straight back with a 5 play drive resulting in a 10 yard TD pass to Stuart Keltie in the back of the endzone. The Hornets making the Reapers defence look nothing more than average with last year’s MVP (Simon) benching himself half way through the drive due to poor play. The PAT would fail due to a penalty on the play making the score 12-6 to the Hornets.

The Reapers knowing they had to make up for some defensive errors would put together a nice 4 play drive. Simon would find Matt down the sidelines on a corner route for 30 yards. This would set up Johan Pols for the 10 yard rushing TD. Reapers would also fail on the PAT resulting in a tie game once again. 12-12.

The defence of the Reapers finally settling down and playing to their ability would force a quick 4 & out from the Hornets and take over on offence. The Reapers offence, which seemed to be firing on all cylinders in this game, came up with another 4 play drive resulting in a TD. This time, needing only inches for the first down Si would hit Robert Domaille short on a scramble play who managed to evade numerous tackles, turning a short catch into a 25 yard TD run. Again failing on the PAT left the score at 12-18 and giving the Reapers their first lead in the game.

The Hornets would take over on offence, however on 2nd down on a short pass to his centre, Jordy would throw an uncharacteristic INT. Craig who read the play perfectly and return the INT for a TD. Finally a PAT would be converted with Si finding Johan in the back corner of the end zone for the 2PAT, making the score 12-26.

Not fazed with the previous play and the Reapers defence drawing numerous flags, The Hornets would drive down the field capping off the successful drive with a 15 yard pass to James Alderton (“Aldy”) who with his speed found himself open on a deep slant. Missing the PAT once again the score would sit at 18-26.

Knowing that this game would be a shootout and with a short amount of time on the game clock, the Reapers would come out firing with a deep corner route to Matt for the 20 yard gain. Chris Grantham would cap the 5 play drive with a 20 yard TD catch and run after the reapers used all their timeouts. Quick moves from the big man! Baz quickly coming off the corner would elude the centre who never saw him coming to pick up the sack on the PAT. Score at the half is 18-32 Reapers.

The Reapers starting with the ball in the second half looked to put the game away however the Hornets defence had other ideas as Aldy pulled in a poorly thrown behind the shoulder pass to the endzone.

Hornets set on taking advantage of the turnover and keeping pressure on the Reapers would again find Aldy on a quick slant. Aldy with his sheer speed would run the full 45 yards for the TD. The failed PAT means the score stands at 24-32.

The Reapers would continue to offload the ball to their running backs on their next drive however would capitalise on a short out rout pass to Matt for the TD. Matt would also pull in the 2PAT putting the score at 24-40.

The Hornets offence would take the field, once again going to Aldy on 3 consecutive plays on quick slant. A play that worked on all 3 occasions as it had been all game. Matt finally adjusting to the play would find himself perfectly positioned for the INT. This should have been a simple pick six however he found it hard to run in a straight line, opting for the classic ballerina spin into the defender that we have seen all year.

Putting the game away, Craig would take the pitch for a 25 yard rushing TD on the next drive. Defences have been finding his burst of speed difficult to defend all year. Matt pulled in the 2 PAT to take the score to 24- 48.

The Hornets would not give in however with a spectacular catch and run from Jack Romeril for the 25 yards TD. PAT would be unsuccessful with the score now at 30-48

After an unsuccessful drive from the Reapers on offence, Jordy would throw his 3rd INT on the day this time to Johan who brings his total to 9 this season.

The Reapers would go to Matt once again, this time on a stop and go which left Matt open for the 40 yard TD. After the failed PAT which was this time intercepted by Baz the score finished 30-54.

This game promised to be a battle between two of the heavyweights in the league and it was just that. Reapers came out on top this time with a defence that continues to impress and an offence that seems to be gaining momentum week on week. I know that I will be looking forward to the next time these two meet!