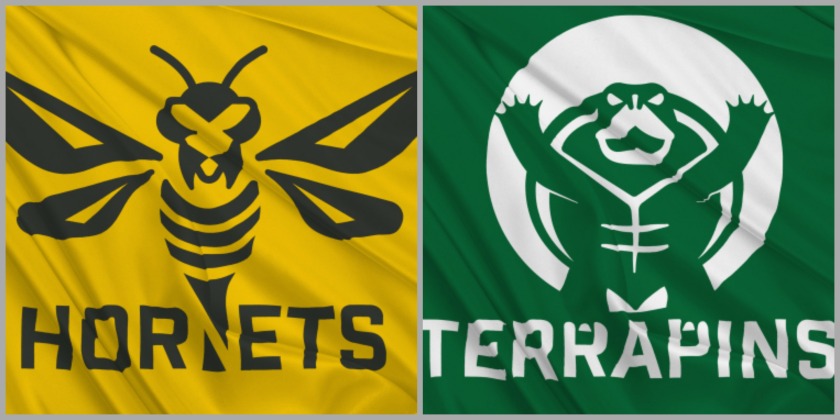 This game marked the first game for the league following the bye-week. The Hornets would be without both their regular starting quarterback, Jordan Gallienne and their starting centre, Luke Pattimore. The Terrapins would be looking to capitalise on this advantage and close the gap at the top of the league.

Hornets started the game on offence and replacement quarterback, Sam Barrell (Baz) started off on the right foot, completing a short dump off pass to his centre Stuart Keltie. Next play saw a long pass to James Alderton on the post route for a first down. A short run, followed by an incomplete pass brought up third down. Baz however was able to find Jack Romeril (Rom) in the front left of the endzone on third down. Luca Finetti was able to jump in front of the extra point attempt for the interception. Score 6-0.

Terrapins opened their first drive with two consecutive running plays, neither which gained much in the way of yards, but a third down pass to their centre Iaan Erasmus took them with seven yards of first down marker. The fourth down pass was tipped and picked off by Mike Donaldson, ending the drive.

Hornets next drive saw Baz look at Stuart again, before firing it deep to Aldy, but the play was called back for a false start. The following play went incomplete. (As did the next one which was mistakenly called third down instead of fourth) The follow pass to Stuart ended with him being tackled before the first down marker and the ball being turned over on downs.

Terrapins started their next drive with a run play, before a long catch and run by Callum Hockey (Clum) saw them cross first down. A short slant play to Joe Wilkinson (Wilks) brought up second down, with Gary grabbing another slant and run to just short of the endzone for third down, with Luca grabbing the first Terrapins score of the day on the next play. The extra point went incomplete, with the score tied at 6-6.

Hornets next drive started well with Baz finding Elliot Gallienne for good yards to just outside the no run zone, where a dump off pass to Stuart picked up the first down. Another short pass to Stuart saw him carry the ball to the endzone. Mike Donaldson was then able to haul in the extra point, score now at 13-6.

Terrapins would again be looking to tie the game up, and started with two short run plays. The long third down play was batted down, leaving the Terrapins on a long first down. Terrapins pulled out a trick play, allowing Nick to run, but he was tackled short of the first down marker. Turning the ball over on downs.

The following drive saw the Hornets fail to move the ball, resulting in a quick turnover on downs.

Terrapins quickly came our firing, with a long catch and run by Clum and then Luca took them into the Hornets drive on two plays. Nicks pass overshot his receiver on the next play, leaving them with fifteen seconds remaining. The next play fell incomplete and the half ended 13-6.

Terrapins started the second half with the ball and quickly moved to close the gap, with Clum taking the a short pass the entire length of the field on the first play. The extra point went incomplete. Score 13 – 12.

Hornets started with a pass to Stuart, who had become a reliable target for Baz. Mike then ran the ball for good yards on the next play, bringing up third down. Stuart then caught the pass for the first down, and if not for a foot on the line, would have been a touchdown. Baz’s next pass was batted down by Gary, with Ben then defending the next one. Third time lucky for Baz though, as he was able to lead Stuart for another touchdown and the Luke Rabey for the extra point. Score 20 – 12.

Terrapins started the next drive with an incomplete pass, before Clum was able to take a catch on a slant for a first down. Next play was a run that failed to gain yardage. Pressure on the next play forced an incomplete pass. The next play, was a long pass to Luca, where he was able to take three steps in the endzone with the ball in his hands, before Rom coming across knocked the ball out. It was enough established possession to award the score. The two point conversion went completion went incomplete. Score 20 -18.

A quick pass to Stuart again a couple of yards for the Hornets, with Elliot grabbing another pass on second down. The third down pass went incomplete, but Stuart was able to run for the first down with another  pass from Baz. The first down play was a false start, bringing up up second. Stuart once again found himself open, on second, with the third down pass falling incomplete.The play was quickly stopped to clear the endzone of some debris noticed in the endzone before the play. The pass overthrew the intended receiver, turning the ball over on downs.

Terrapins started with run play to just outside the no-run zone, with a second run play to pick up first down. A slant play to Wilks kept the play moving, with an incomplete pass following. On third down, Nick found a wide open Luca in the back left corner of the endzone for the go-ahead touchdown.With Wilks the grabbing the extra point. Score 20 – 25 with just over four minutes left.

An Interception on the next play by Clum could have sealed the game there and then, but Baz was able to tackle him before the endzone, forcing the Terrapins to go all the way back to their 5 yard line following the turnover.

For the Terrapins, their drive was all about trying to kill as much time as possible, with a run play to start and a short pass on their next play. A pass to Iaan very nearly picked up the first down, leaving the Terrains short by two yards. A pass to Ben Saul picked up the first down, helping kill a few more seconds. An incomplete pass on brought up second down, as the Hornets started to use their time-outs. Second down was also incomplete, bringing up third down. The third down pass was complete to Clum, bring up fourth down and the use of the final Hornets timeout. Fourth down went incomplete and gave the Hornets enough time to try one play down field.

A deep ball was caught, but tackled short and with not enough time left on the clock to get another play off, time expired, final score 20 – 25 in favour of the Terrapins. This marked the Hornets’ first loss of the season and meant that the Terrapins closed the gap between the two teams in the race for the title.