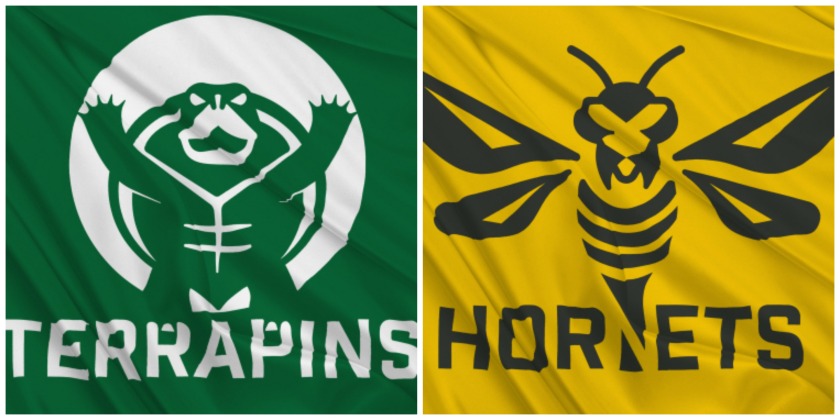 However when both the Hornets and Terrapins worked their way down the field to score on their opening drives, you got a feeling that, just maybe, this game would provide a lot of scoring.

When each team then score on their second drives, you knew that feeling was justified. Only a single point, thanks to a 2 point conversion on the Hornet’s second drive separated the two teams. When the Hornets scored on their third drive, you knew that unless one team’s defense stepped up, it would be even throughout the rest of the game, with each team answering the other’s score.

It was the Hornets defense that first stepped up, claiming the game’s first interception before, again, scoring to take a lead of 27 point to 14 into the half time break. A second interception was made by the Hornets before the break, but no further points were scored off the turnover. The Terrapins would start the second half with the ball and if the first half was anything to go by, then the two score lead the Hornets held, would not last for long.

Coming out to start the second half, it was business as usual as the Terrapins drove down the field once again and closed the gap. A defensive stop via an interception and another successful drive later and once again the game was tied up at 27 points apiece and the shootout was, once again, on!

The Hornets score again on their next drive and once again converted a successful 2 point conversion to take the lead once again. Terrapins the scored again to bring the game back to within 1 point.

As had become the norm for this game, the Hornets scored again to extend their lean once again, 33 to 41. Not to be deterred, the Terrapins immediately responded and the difference on the scoreboard was only one point again, 40 – 41.

With time running down and only a single point in it, the game was looking like it could very well be an overtime game to start the season. With the Hornets scoring again, they took a 40-48 point lead and only needed to hold on to secure the win.

That was something that very nearly did not happen. Driving to tie the game, a shovel pass received just behind the line of scrimmage resulted in a touchdown scoring play being called back. The resulting penalty meant a turnover on downs and the Hornets were able to run out the clock.

Both teams showed that they have the offense that can compete for the league title right away. The way to win is to outscore the opposition and perhaps these teams will be doing just that for the whole season, rather than relying on defence. However, if they can pull the other side of the ball together, then either team will be a force to be reckoned with.